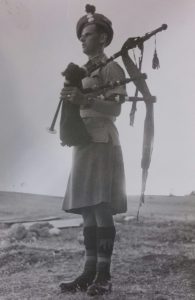 A service record from the British armed services form an immensely engaging part of my research work. Individuals, institutions and media organisations often seek my expertise in decoding a service record. Over the past ten-years I have been researching conflicts from the 1700s to the present day. This can be using military service records issued by the Ministry of Defence.

Getting a service record

For some, the army, navy or air force service record is an important task to engage with their ancestor. For those that are seeking to find a service record for an ancestor, going to the Ministry of Defence website is the best place to start. Here is a link:

If you are seeking an ancestor that served prior to the First World War then a paid website might help you also.Their service record, enlistment or discharge papers may be available online via this paid service. Once you have this record, I can help you understand it more fully. Please contact me by clicking here.

The service record itself is often made of abbreviations for different places, duties and units which contain the relevant information. Looking at the service record for the first time can be rather bewildering but decoding is my speciality so please get in touch if you require assistance by clicking here.

Once the service record has been decoded then I use the information to explore the catalogue at the National Archives. This will yield the available files for the period of the service record. Usually the vast majority, if not all, of the period of service has a file. It is common, however, at the start or end of a service record to have little detail. When personnel are training or demobilising record keeping was not a priority. This is because of the grouping of personnel from many different units.

Undertake the research of a service record with assistance

If it is the case that you would like to undertake the research yourself then I can take you through the service record decoding and then provide you with the file references for the National Archives. Once again, the information in the files at the National Archives can be difficult to interpret so please let me know if you need assistance with this stage here.

A note on a service record for different periods

During the conflicts over the nineteenth century, including the Boer Wars, information on an individual tends to be limited to location, pay and their enlistment details which can have a signature and next-of-kin details.

For the Second World War the “war diary” is usually made up of monthly reports with generally more information than World War One. Each report tends to have a section on major events of unit activity.  A section on the number of people in the unit is also usually present. Sometimes there is a section with relevant documents for that month.

Photographs can be found in the war diaries from time to time when researching a service record. These come in several broad categories. Reconnaissance photos are found in planning documents in the monthly reports in the “war diaries”. For example, landscapes or buildings feature often. In units with specific tasks, such as engineering or service corps, photographs of construction or transport are present. In a recent case I researched in February 2018 there were photographs liberating North Africa during the Second World War. It was not practice for individual photographs to be taken for unit “war diaries”.

Other documents are often attached to the monthly reports in the “war diaries” such as maps, movement orders or exercise or operation documents. In moments where an individual is training, one can see, for example, some of the exercises that they participated in. In those times of front-line service then one can see how the unit they were serving with formed part of larger military operations. There are sometimes excellent reports of engagement with enemy forces within the war diaries. Written after the conclusion of an operation, these provide much detail. One can also see maps and more routine aspects of military activity, such as movement orders. These sometime contain lists of the equipment and vehicles that required to be transported. This is often very illuminating as one can appreciate the scale of the tasks involved.

Before you start research on a service record…

Before starting the research on a service record it is important to recognise that the war diaries are not comprehensive sources of information. They do not record the daily activities of every person serving in the unit. Neither do they record the names of all those serving but officers do tend to be named. Despite this, the “war diaries” remain the most detailed source of information for those seeking to find out what their ancestors undertook as part of their active service.

If an individual with an army service record has served for several years then there can be a number of files to examine. With most army service records of around four years, particularly for the Second World War, there are usually around 1,000 pages. Part of my research service is to take photographs of these and send them as a digital download.

Please get in touch for help with a service record

Please get in touch here if you would like more information here on stage in the process of obtaining, decoding and researching a service record and I will be happy to help.

The new research room at the Imperial War Museum

A number of interesting projects recently