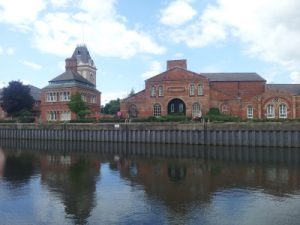 It was clear when I first visited Newark a few years ago for the project that there were already groups of people active in the community that were passionate about preserving the heritage of their local waterways. 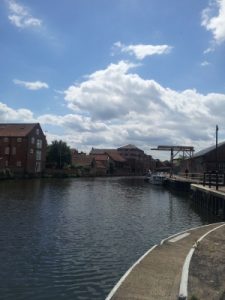 It had not always been so. Their determination to create interest stemmed from a period of stagnation. If one visits Newark it becomes immediately clear that the River Trent largely defines more than the name the town. A number of attractive bars, restaurants and modern flats either side of the castle are converted from former vessels or premises used to store and sell the goods carried on the river.

It was therefore apt that the sun shone brightly on these lovely buildings on the 27 June 2015 when the waterways heritage day took place to showcase current research and projects. The day itself was started with a morning hosted by Wendy Freer who is an expert on the life of people living and working on Britain’s waterways during the eighteenth and nineteenth centuries.

Philip Riden, who steers the project, took to the podium first to share his expertise on the history of the waterways in the East of England before 1600. His talk delivered an excellent backdrop for the audience to appreciate the extent to which these have contributed to the historical development of the region. Rob Wheeler then took the helm to guide us around the rivers and canals surrounding Lincolnshire from the start of the early modern period. 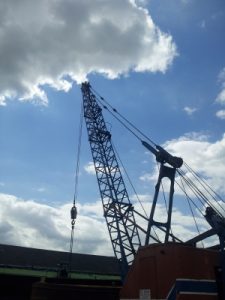 When in the water, Newark Heritage Barge can be many things at different times: a meeting point for boat enthusiasts, a floating centre for education and waterways heritage museum. This rather intriguing characteristic was not missed by the department of design at De Montfort University you can view through this link here. Rosemarie Fitton and Nicky Harding from the department explained how they directed a project whereby students submitted designs that the barge might utilise in the future. I do not think I was alone in relishing the prospect of some of the incredible designs becoming reality.

Robin Stonebridge from the Chesterfield Canal Trust then spoke about their impressive project to build Dawn Rose a cuckoo boat. This type of craft is unique to the Chesterfield Canal and was different because of the fact it used a sail to navigate up the River Trent to Torksey. Perhaps the most striking fact was that Dawn Rose was made only using hand tools as would have been available at the time similar craft were built. You can click a link to find out more information here.

After a light lunch – and many thanks to Margaret – there followed a heritage walk on the river bank to the dry dock where the Newark Heritage Barge, named Leicester Trader, is undergoing repairs. The walk itself has been designed by the Newark Heritage Barge and takes in the stretch of the river predominantly in the centre of Newark, past the castle and town lock, up towards the old Trent Navigation Company building which has recently been converted into a licensed premises. 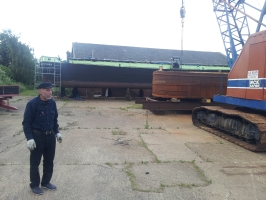 Leicester Trader is currently out of water having some significant repairs. For those not in-the-know, a boat has to undergo an inspection every 7 years for safety and insurance reasons. I was immediately struck at how big she looks out of the water. Skipper of the Leicester Trader, Les Reid, then took us through the process in detail.

It remains to me to thank everybody that attended and, of course, cross my fingers that such interest can be maintained once Leicester Trader returns to the River Trent. I am sure any of you that are reading this blog and are interested can get in touch with me here, at the University of Nottingham or the Newark Heritage Barge directly. After several years of the project there are hopes that it can continue. I shall, of course, keep you informed of any progress here.

The new research room at the Imperial War Museum

A number of interesting projects recently